Despite some raucous vocal opposition from a number of the Public in attendance, White Rock Council unanimously endorsed proceeding ahead with Chloramination of White Rock water at tonight’s Council Meeting.

Greg St. Louis had Dr. Saad Jasim, the Ph.D utility manager, give some mumbo-jumbo presentation with lots of dry, unintelligible data, graphs and excerpts from reports which were not cited or footnoted.

Dan Bottrill spun a few yarns, crowed indignantly about the City’s transparency on the water utility and acted as if the knowledge that ammonia existed naturally in White Rock well water was some new, previously unknown profound revelation.

EPCOR knew about this all along and if you look at Greg St. Louis’s Report of December 14, 2015 (found here),  which was his first attempt to chloraminate White Rock water, this is plainly stated in the last paragraph of page 26. But Council who spoke suggested tonight that this was all brilliant news to them.

Dan Bottrill was reminded that the City knew about this at least as early as May of 2015 when a secret meeting was held between EPCOR,  Fraser Health and the City to secretly all sign off to make the switch from Chlorine to Chloramine. Throughout its TWQM Project, EPCOR swore up and down that Chlorine, not Chloramine was the best disinfectant for White rock water. But apparently,  EPCOR’s consultants had made some boo boos on the White Rock well water quality. I guess they miscalculated the manganese. EPCOR did bench tests in April 2015 which showed that  Chloramine brought “whiter whites”. This, no doubt was presented at the secret May 2015 EPCOR, Fraser Health and city of White Rock meeting.

The City slyly out of nowhere used this “whiter whites” pitch it in their October 15, 2015 “Water Utility Community Forum”, some material from which can be found here:
http://www.whiterockcity.ca/assets/City~Services/Water%20Utility%20Boards.pdf

I have scanned the city’s Chloramine Brings Whiter Whites sheet from Oct 15, 2015 Water Utility Community Forum here. Note that the date of the “bench scale tests” is April 2015, long before the City consummated its water utility purchase deal on August 28, 2015.

So that is the City’s gimmick. “Ammonia is already in the water naturally, so why not add pails more if it can mask and conceal the high level of manganese in the system to make the water look better than what it really is”.  Personally, there is a world of difference to me between dealing with naturally occurring ammonia (it is higher at the Merklin wells than it is at the Oxford wells) and adding pails of it in concentrated chemical form to the water.
[Editor’s Note: It is dishonest to suggest that because trace amounts of a substance is already in the water, that adding more is ok. Trace amounts of arsenic are required for the body to function, but adding much more arsenic to your drinking glass can kill you. Similarly, your blood is composed of thousands of chemicals many of which, when taken in excess, can be harmful. Click on the picture below for more details. Science – When Used Properly, Reduces the Stupid!] 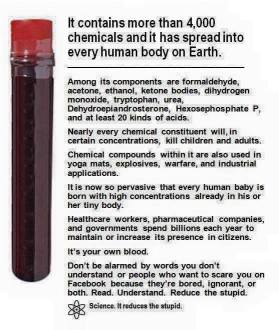 Neither Dr. Jasim, Dan Bottrill nor anyone on Council discussed any of the “disadvantages” of Chloramine. No one mentioned even the disadvantages of Chloramine that St. Louis noted on page 27 of his December 14, 2015 Report – “impacts to the environment… toxic to fish and amphibians….does not dissipate by standing or boiling”. So there was not one mention or concerns expressed about any possible adverse health affects to humans, how it is less effective than chlorine on certain viruses and bacteria, how it  leaches metals like lead from pipes and pits piping more, how it impacts rubber fitting in plumbing and so forth and so forth.

It was quite an orchestrated event, craftily although obviously played out and no doubt this was the previous topic of more than one secret Council meeting.

One suggested option is to Chloramine Rally hold  in conjunction with the City’s 60th Birthday Party on April 29 at the Centennial Arena which takes place between 11am to 9pm. 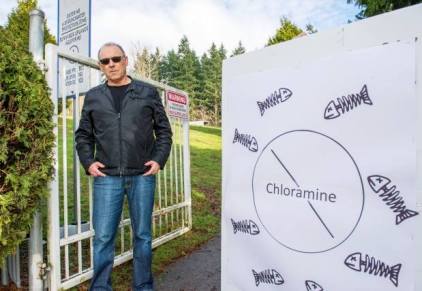